The Case for a Worthy Return of the Provident Mutual Building

You are here:
Blog 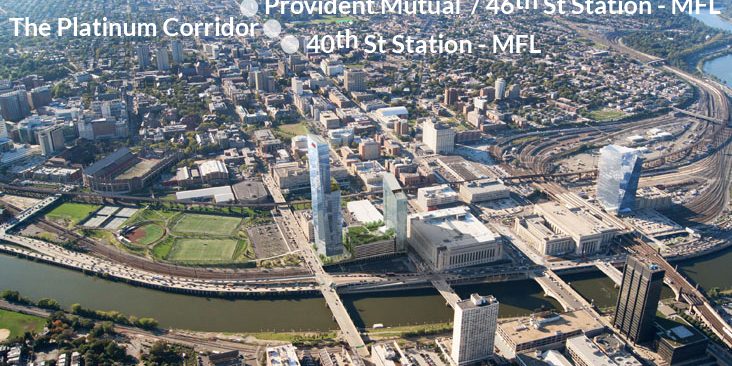 On March 4th, Inga Saffron wrote a terrific story about the City’s hesitation to follow through with its plan to move the Police Headquarters to the majestic former Provident Mutual Building at 46th and Market, The Neoclassical Palace Nobody Wants.

To Mayor Kenney, Councilwoman Blackwell, the Planning Commission and the Commerce Department . . . this is our opportunity to ignite further economic impact westward on Market Street, from 30th Street to the new 40th Street Transit Hub and onward to a new Police Headquarters at 46th and Market. This could be a world-class “Transit Oriented Development”!

University City has emerged as a driving engine of Philadelphia’s future. Billions (yes, billions) of dollars of development have occurred from the University City Science Center at 38th & Market, east to 30th Street including the ongoing expansion of the Science Center, Drexel’s explosive development and expansion of its urban campus centered on Market St, and of course, the success of Brandywine Realty Trust’s three skyline altering towers, Cira Centre, FMC Tower, and Evo. Additionally, there is another $10 Billion of combined development planned and contained in the Schuylkill Yards Plan just west of 30th Street Station; and the Ventas /Wexford/Drexel Plan: UCity Square. UCity Square which stretches from 36th-38th Street and from Market Street to Powelton Avenue has recently begun construction of its first project, 3675 Market Street where Cambridge Innovation Center and the University City Science Center will anchor and occupy part of 345,000 sf.

Additionally, our company, University Place Associates (UPA) and SEPTA have made a significant mark on Market Street. SEPTA is in the middle of a major construction upgrade to the 40th & Market Street Transit Hub. Our efforts at 2.0 University Place, where we designed, developed, and built the only LEED Platinum office building in both University City or Center City, is uniquely significant. Anchored by the U.S. Citizenship and Immigration regional office, this five-story 98,000 sf building was sold last April to the global Swiss insurance giant Zurich Insurance Group, for a record price. It was Zurich’s first investment in the Philadelphia real estate market. In a way it has a special significance to the Police relocation. University Place Associates has a vision for a LEED Platinum Corridor. It would be the first such development in the world, dedicated to the highest environmental and technical standards of sustainability according to the U.S. Green Building Council’s “Leadership in Energy and Environmental Design” (LEED).

If the City’s forward thinking Mayor, Jim Kenney and his team can see what’s possible, there’s a truly dynamic narrative here: innovative energy, unprecedented commitment to climate change and standards of excellence in building construction — and a major City statement of neighborhood investment.

Moving forward to a vision of a… ‘LEED Platinum Corridor’
April 6, 2016